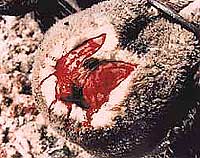 Mulesing, named for a JH Mules, an Australian rancher, “involves slicing flesh and wool away from the sheep’s rump to prevent blowflies from laying eggs,” usually without anesthetic.

Certainly, it’s to save the sheep from dying by blowfly. But also certainly, it’s an economic practice, not a compassionate one. See, if it were done out of compassion, the sheep would get an anesthetic for its de-assing. But because anesthesia costs some amount of money, and the sheep, though put through a painful fucking process—it’s a de-assing, y’all!—recovers, it’s an economic thing. An evil, evil economic thing.

Peter Corish, president of the National Farmers’ Federation, says he has seen sheep die within three days of being infested with blowflies, and likens mulesing to seeing the dentist: It may be painful, but “the alternative is much, much worse.”

No, it isn’t. The alternative is that you give the damn sheep some aspirin during de-assing, but of course that would cost money, you evil, evil man.

After the initial shock of the skin being sliced off, the endorphins may provide some short term pain relief. However, after 24 hours endorphin levels are back to normal, whereas cortisol levels are still twice as high in mulesed as in unmulesed lambs ( 21 ).

Lambs also show through their behaviour that they are in pain. After a short period of normal behaviour, they stand with their head down, nose almost touching the ground, back arched and body hunched. When they move, they have a short, mincing gait. This abnormal behaviour continues for 3 days. Lambs continue to strongly avoid the person who mulesed them for 37 days ( 22 ).

I absolutely needed no scientific studies to tell me that de-assing hurts a sheep, and neither did those who did the study. The study was done strictly because there are people out there, the public and their representatives, who need hard evidence to be swayed to act against evil people. They need to read about it, to see the pictures, to taste the blood, before they’re able to recognize the practice as a manifestation of evil. A mere description of the act apparently isn’t enough.

This entry was posted in fear for humanity, mach?, money, politics. Bookmark the permalink.

Bad Behavior has blocked 152 access attempts in the last 7 days.