Fire at the old McNeely place 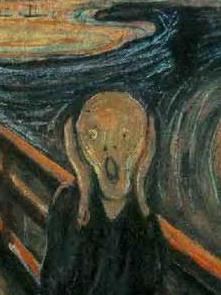 I’d like to preface this by stressing that I’m not usually an idiot. Usually I can feed and clothe myself with practically no help. I can operate a car with a stickshift and successfully troubleshoot the fridge icemaker when it starts bogarting the cubes. I read books with big words. So when, yesterday, I partially reformatted my hard disk by mistake, well, I got to thinking about the many, many things I can do that don’t cause unbearable hardship and grief. Washing my own hair, for example.

Everytime I boot up my computer, a momentary window appears that allows several different pre-boot options. Everybody’s pc does that, of course, unless it’s set not to. I’d always escaped out of the window (to save those three or four seconds that elapse before booting continues on its own). Prior to yesterday.

This newest computer has been a rock. Unshakeable. I’ve never needed to tinker in any way with the boot process; Windows comes up, like the sun, and I go about my business. But I’ve idly wondered, as I’ve watched it warm up, what some of the pre-boot functions called. This computer has a different BIOS from my last machine, so the options were different. “Safe Mode” was there, of course. But so was something called “Fastbuild,” and something else called “System Recovery.”

On my last machine (that’s sitting on my son’s desk), an automatic disk scan occurred if the computer shut down abnormally. But this new computer has never once (at least obviously) performed any kind of diagnostic on itself after a bad shutdown. I wondered–as I waited for the machine to boot–why that was. Did it need to? Sure it did, if only to identify bad sectors and cauterize them. Maybe there was some setting in either “Fastbuild” or “System Recovery” that was switched off. Maybe I should switch it on, just to make certain that the hard drive knew where its bad sectors were. In order to make this rock-solid machine even rock-solider.

So I hit “ctl-F” to enter Fastbuild. Turned out that was where the BIOS settings could be manipulated. I didn’t really want to mess with those, because it takes a lot of trial and error to get things right in there, and I was just idly curious. So I exited that and clicked on “System Recovery.” Ah! Here it was; a couple paragraphs with several exclamation points. The last paragraph stated that, if I did choose to recover the system, none of my data files would be harmed. That was good. The first paragraph was about two column inches long and looked boring, so I didn’t read it. I already knew everything I needed to know: if I recovered the system, nothing bad would happen.

I pressed “yes.” Another screen came up to tell me that certain things were wrong with my computer and the program would continue. A friendly little progress bar appeared at the top. “Time to go” read 18 minutes. That was good, too, as a final check. I mean, how much damage could a program do in 18 minutes? I left to make myself a sandwich. It was a good, successful sandwich.

Eighteen minutes later–right on time–the program completed and rebooted the computer all by itself. The usual boot process started, the usual pre-Windows windows appeared, and then something weird happened, as I ate my sandwich: A “Welcome to Windows” splash came up, followed by a sexy woman’s voice saying “Welcome to Windows.” That was odd. But even odder was the next screen, my desktop. It was barren. Barren except for an “AOL offer” icon, a “Help & Support” icon, and a “User’s Guides” icon. Barren as the Gobi Desert, if the Gobi Desert contained only computer icons, and only three of them.

“Christ Almighty,” I said. Also “Great Fucking Shit” and “Oh my fucking God.” Another screen superimposed itself on my cracked and bleeding desktop, wondering if I had a printer, and if so, where was it? “You’ve got to be fucking bagging me,” I added.

I canceled out of all the prompts in order to call up “My Computer” and take a look at my C: drive. Things were… things were still there! Outlook…there! Winpatrol…there! Thank God! Then I clicked over to HP-owner desktop in the file tree. There! But…where was everything? WHERE WAS EVERY FUCKING THING?

Calm down, calm down. Surely it’s still all there, I said to myself. I’d found things that wouldn’t be there if the drive had been completely turned back to its factory state; surely the rest of my stuff was there somewhere. So I searched for the names of files that I knew resided on my desktop and nowhere else. Things like my “Northern Exposure” download file and my “pa55word5” file. Not…..there! Gone! Christ on a hatstick!

ALL the critical data files on my desktop–files that “system recovery” told me would still be there after I recovered the system–gone!

I clicked Outlook up to make sure all my email archives still existed. Outlook requested the serial code before it would initialize. Of course I didn’t have it; it used to be in the “Serial Codes” text file on my now-pulverized desktop! Same thing with Excel, same thing with Word. I searched for .pst archives, because surely they were still there, with all my correspondence. Gone! It must save to the muthafuckin HP-Owner Documents & Settings file! What about my work file, with all the stuff that I painstakingly entered by hand over literally a hundred hours the last year? Not there! Must’ve been in the muthafuckin HP-Owner Documents & Settings file! For the fuck of Buddha!

Like I said, usually I’m not an idiot. Usually I’m pretty cautious when it comes to my computer. I do have some backup files spread out on my kids’ computers, but they’re almost a year old. So a year’s worth of puttering and writing and squirreling away links and fiddling with my computer to get it just so, to make it the rock-solid computer of my dreams, is gone. It’s like a fire swept through my house. A very persnickety fire that charcoaled only things I’ve touched in the past few months.

I’ve got a file recovery program running in the background right now; maybe it’ll find a few odds and ends that I can work with, I don’t know.

And I know it’s all my fault, too. That’s probably the worst part. If I’d only bothered to read the first paragraph of the System Recovery screen, maybe things would be different. Maybe I’d be driving to the grocery store, shifting gears like all get out, feeling good. I don’t know.

This entry was posted in computers, curmudgeonhood, humor. Bookmark the permalink.

2 Responses to Fire at the old McNeely place