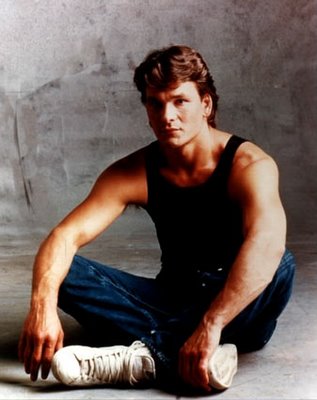 I was watching an episode of “Guess Who Married Your Mother?” or “I Married Your Mother?” or “Guess I Totally Bagged Your Mother!” a few minutes ago in the kitchen of this place in Miami I hang out in. The show was doing what all these shows do from time to time, which is to trot out an ex-star and have the “real people” played by the regular actors moon over him like he was the second coming of Christ Almighty. Or her, waltzing in as Mary. But in this case it was Patrick Swayze, so the Christ metaphor is probably the one to go with. Anyhow, it was one of those “Don’t look now, but PATRICK SWAYZE is sitting at the table right behind you.” “PATRICK SWAYZE? RIGHT BEHIND ME? [looks, swoons]”

The regular actors on this show play people who I assume are in their mid to late twenties. I play a person who is in his mid forties; I barely remember who Patrick Swayze is. I’m not sure I could pick him out of a police lineup unless he actually was the shit who knocked me down and took my wallet half an hour beforehand. The man flash-danced twenty years ago. Or danced dirtily, whatever. Since then he’s been in a string of piddly-ass movies. Or has had piddly-ass parts in slightly more than piddly-ass movies. The point is that the generation blankers on this show can’t POSSIBLY really know who he is, let alone adore him enough to suck his cock. But there they go.

Remember when Carroll O’Connor sucked Sammy Davis, Jr’s cock on “All in the Family?” Or when Gary Coleman sucked Nancy Reagan’s cock on “Diff’rent Strokes?” Sure you do. Is this a contractual thing? Or is it just somebody on the show asking for a favor, or (more likely) doing a favor for one of their old heroes who’s fallen on hard times? It’s probably that. That’s what it probably is.

I don’t mind favors being done for friends. Of course that’s a good thing. But when they’re not my friends, when it happens so publicly, when the favor involves me in the transaction somehow, then I start minding it. There should be a warning scroll during the show, to allow me time to change channels before I’m compelled to see things untoward: “Patrick Swayze’s cock sucked in the following episode, viewer discretion advised.” That sort of thing.

This entry was posted in curmudgeonhood, humor. Bookmark the permalink.

Bad Behavior has blocked 296 access attempts in the last 7 days.