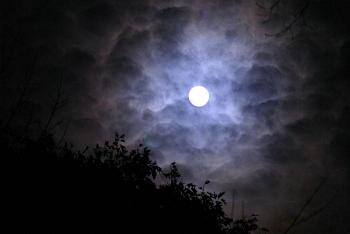 I was outside a minute ago, watching the moon. Gibbous, almost full. Awesome. But what an idiot.

It does the same thing over and over again. It’s one stately dude. Obeys all laws. Big as all get out. But, snoresville, right? Same as the stars and the sun. I mean, I understand why the Egyptians and everybody else venerated them. It goes without saying that a God is someone who knows how to be huge and punctual. Everybody likes a punctual God. Is it just me, though, or is the whole punctual thing a bit overwrought? Is the whole predictability thing a tad tiresome?

The Moon’s spouse: “Rice Krispies? Again? How about a nice raisin bagel?”

Maybe if shamans had been slightly more on the ball five thousand years ago we would just now be getting over the idea that the moon, the stars and the sun were frightful idiots. I wonder if things would be better now.

This entry was posted in curmudgeonhood, humor, outside. Bookmark the permalink.

Bad Behavior has blocked 138 access attempts in the last 7 days.