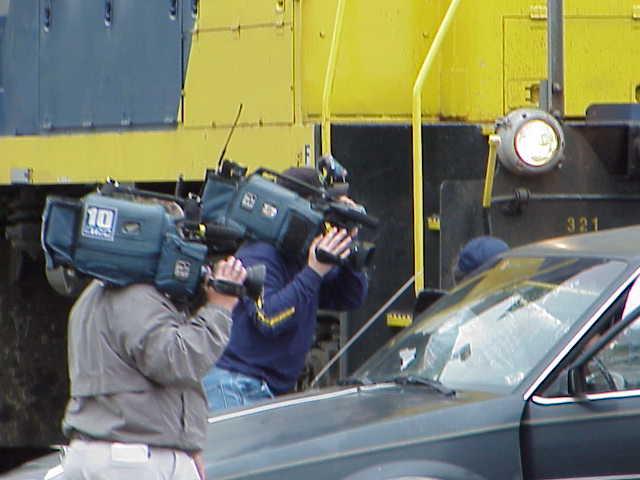 “Everybody started scattering, you know, there’s mayhem everywhere. And then a police officer came into the building, you know, came in professional with his gun raised, and then he proceeded to shoot the guy.”

This is a recent phenomenon. A hundred years ago, no one would’ve described the scene this way. A killer would never have proceeded to shoot the guy; he would’ve shot him.

Today people no longer know how to react to something that actually happens to them. They act like reporters, like they were somehow removed from the action, like they’re dispassionate observers from another planet. They just beamed in and beamed out.

Reporters are not balanced. They are not un-biased. The idea that a “balance” of fairness must be struck between a community and someone who preys on that community is appalling.

A “balanced” look at bigots or Hitler or napalm is so far away from real balance that it boggles the mind. Today, being a reporter means being required to substitute the word “nazi”for “that fucking soulless nazi,” reducing the outrage to a mechanical phenomenon, like a malfunctioning toaster oven.

Normal people ape this, and have for years. It comes from a lifetime of watching television, from seeing reporters report. It has fed on itself. People are no longer people; they’re eyewitnesses. No one ever appears to be directly affected by anything that happens. Things never really happen anymore, they proceed to happen.

Learned dispassion can be beneficial in some ways that are hard to knock: it’s an anesthetic for the masses. People simply don’t respond to horror in ways that might lead to further horror. They have subconsciously learned to turn away from spectacles and get on with the job of production. That’s useful, but it’s costly. People never learn how to live, they just learn how to exist.

The media inoculate people against responding in a normal manner to manifestations of evil, and it’s possible that this mechanism isn’t a dumb outcome of modern history. It’s possible that the mechanism was thoughtfully begun by some cabal of the powerful in order to produce the results it has produced. I’m just sayin. The result is certainly economically wonderful: dispassionate workers are productive workers.

In calmer times, it’s my belief that the world is too complex for any organization of humans to fathom it to the degree necessary to control it. It’s so complex that a group of humans or a government cannot manipulate its parts in any but the simplest of ways. But I also believe that won’t always be the case, because of technology.

Some day, maybe soon, powerful people will have at their disposal software and processors that can crunch enough numbers quickly enough that they will be able to control systems that have heretofore been uncontrollable. When it’s only necessary to push a button on a very expensive computer in order to profoundly guide events, a profound and secret compulsion to do so will be unavoidable. I don’t think it’s happened yet, but it’s possible.

Another aspect of this line of reasoning is that a very expensive computer engorged with subtle programming won’t die. Once it exists, it exists. That’s never been true before. All of history’s previous warlords and despots eventually died. Napolean died, Alexander the Great died, Hitler died. This thing won’t die, and it won’t need a Napolean to press its buttons; it’ll just need somebody who knows where the buttons are. Once it exists, there’s no reason for it to stop existing. That’s frightening.

Given for a moment that a cabal is responsible for the marvel of social engineering that is the Western media, I don’t think they planned on the response of non-Western people, people who are not veteran media consumers. Non-westerners can’t be anesthetized in the same way, if only because many of them are so dirt-poor that they can’t afford to consume enough media for the inoculation to have any effect.

I suppose the assumption was that since these people were dirt-poor and far away, they could never matter. That assumption has turned out to be wrong, of course. 911 is proof that they matter. And now that the Western world is being affected by these people, I’m afraid that our years and years of being inoculated by the media prevents our responding in any normal empathic way to the situation.

A normal response would be to come to the aid of these communities that are so completely fucked up that they produce mass-murderers, so that they won’t produce mass-murderers anymore. An appropriate cabalist response might be similar: to raise these people’s standard of living high enough so that the media could begin to soothe them, and make them as disconnected from reality as we are.

Neither of these things is happening. Instead, we’re killing them.