the impending run on yachts and caviar 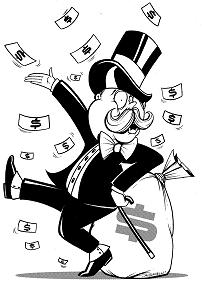 We’re in the midst of a serious financial crisis, and the federal government is responding with decisive actions,” Bush said in a televised address Wednesday night from the White House.

Bush pointed out that the collapse of several major lenders was rooted in the subprime mortgage market that thrived over the past decade.

He said passage of the $700 billion bailout proposal was needed to restore confidence in the market.

“I’m a strong believer in free enterprise, so my natural instinct is to oppose government intervention,” he said. But “these are not normal circumstances. The market is not functioning properly. There has been a widespread loss of confidence.

“Without immediate action by Congress, America can slip into a major panic.”

Normally, I’d trust my president to level with me, and I would support action to arrest whatever calamity he was leveling with me about. But W has a track record of lying. That’s important to remember. Now, it may be that this debacle is truly 700 billion dollars large. It may be; the banking system has been working with very little oversight for so long that enough wealth could have been skimmed off the top by tweedy thieves to finally mean disaster and ruin for the rest of us. And there are a few people out there who should know who aren’t named George that are telling us that things are dire. On the other hand, there are more than a few economists who are telling us to step back and think this one through before we pull out the big checkbook. So I’ll be damned if I’m going to take Chimpy and his cronies’ say-so on such an enormous and costly decision.

The man who Paul Begala a couple hours ago called a “high functioning moron” has not a shred of respect left, even among his own party. And I’m so used to his lying that I immediately start looking for the ulterior motive. Is that a pitiful state of affairs or what? In this case, I fear that it may be a final wealth grab right before they head out the door. 700 billion dollars. That’s an enormous amount of money to take out of our pockets to put in the pockets of bankers and power brokers. “Let’s get that legislation passed now, before the little people know what’s hit them.” 700 billion dollars.

The man threatened us with doom and depression yesterday during his speech if we didn’t pass his proposal. He stood up and told Americans that if his bill weren’t passed immediately that it was time to panic. Hey, asshole: it’s not 9/12 anymore; you can’t buffalo us. We’re on to you, motherfucker.

Like I said, this may be a debacle that needs addressing in a timely manner. But I want Congress to look at this thing, make sure it’s necessary and appropriate, make sure it’s constrained and regulated, so that these goddamn bankers and CEOs don’t stroll over to the yacht and caviar emporium as soon as we turn our backs on them.

Because you know that’s exactly what they’ll do if we turn our backs on them.

This entry was posted in money, politics. Bookmark the permalink.

Bad Behavior has blocked 189 access attempts in the last 7 days.