“You’re a better man than I am, Gunga Din” through the ages 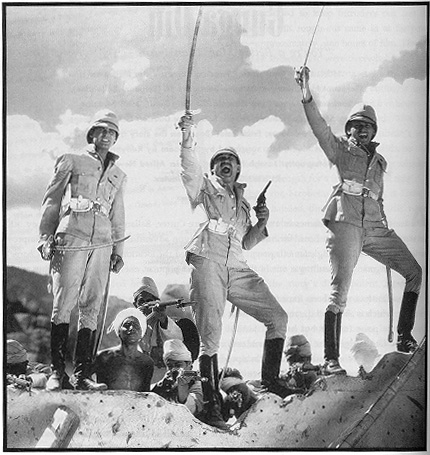 1880: Soldiers cowering behind a bulwark as Din delivers water to the dying on the battlefield, bullets whizzing round his head.

1911: Farmers resting on bales of hay while Din tirelessly tills the fields before the crows descend and eat the seed.

1936: Migrant workers listlessly setting up camp as Din canvasses the surrounding region for job opportunities for himself, and his compatriots too, if there’s enough work.

1955: Townsfolk searching high and low for communists while Din allows an out-of-work screenwriter to stay at his apartment “for a day or two, until this thing blows over.”

1964: Police shooting protesters with water cannons as Din limits his use of the word “nigger” to twice a week.

1992: Investors bidding up the armaments industry on rumors that the US is about to increase weapons buying while Din throws his money into biotechs because he sees a chance to make a tidy profit while riding the “it’s also making a difference” angle.

This entry was posted in fear for humanity. Bookmark the permalink.

Bad Behavior has blocked 247 access attempts in the last 7 days.