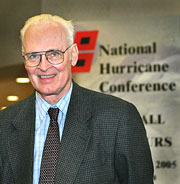 Gray’s crusade against global warming “hysteria” began in the early 1990s, when he saw enormous sums of federal research money going toward computer modeling rather than his kind of science, the old-fashioned stuff based on direct observation.

It’s stuff like this that makes me pay less attention to someone who has important things to say. Gray is the guy from Colorado or Utah or somewhere who forecasts the number and severity of hurricanes every year with canny accuracy. I say that because it’s hard to find studies that describe how accurate his forecasts are. I don’t doubt they’re out there, but they’re hard to find.

I did find some raw data from ’83-’96 at faqs.org, so I took a calculator out and went to town. Because I’m bored, that’s why! Anyway, over that timeframe, Gray does come out ahead of frank guessing. His prediction of seasonal “named storms” is on the same side of the 40-year mean as the actual observed number 83% of the time. His “hurricane” prediction numbers are on the same side of the mean 69% of the time, while his “intense hurricane” prediction comes in at 71% for his June numbers, and 100% for his August numbers.

Since I had to do that myself, it beats me whether those numbers are any good when compared to other meteorologists’ numbers. Judging from the hype, I suppose they are, but it’s very hard to verify that. What I’m saying is that, since I believe him to be a bonehead when it comes to the evidence coming in about global warming, I’d be more comfortable considering him an over-hyped bonehead about what he’s famous for. I can’t do that comfortably because apparently no one who knows more about numbers than I do–just about anybody–has analyzed his predictions in comparison to both chance and other forecasters.

A TV reporter asks Gray a key question: “What if you’re wrong?”

“We can’t do anything about it if I’m wrong. China and India are going to burn fossil fuels.”

In other words, he thinks it’s too fucking scary to think about, and if he thought about it he couldn’t do anything about it anyway. And he doesn’t want anyone else to think about it either. So shut up.

This entry was posted in fear for humanity, original research, politics, weather. Bookmark the permalink.