Fences: an incredibly complicated treatment of the obvious, with a diagram that wasn’t worth the hassle

Privacy fences are a necessary part of suburbia, because few things are more fraught and tedious than feeling obliged to talk to the neighbors. Fences allow people to ignore other people, and that’s healthy. A neighbor who’s out of sight behind a fence, even if he’s slaughtering pigs in his backyard, is better than a neighbor who putters around in a fenceless garden waiting to spring a conversation trap on the unsuspecting.

I wish fences weren’t necessary, but since houses in the suburbs are packed tight, they are. So while I live in the suburbs I’ll always require a fence (I have other plans, though).

There’s a circle around a person that, if someone is outside its radius, there is no obligation for those two people to talk. That’s a pretty good distance. There’s an obligation to wave at the other person, perhaps, or to nod, but not to talk.

Similarly, there’s another circle around a person that defines the limit beyond which one isn’t even obligated to acknowledge someone else, even if he can be seen. At that distance, by convention, it’s okay and proper to pretend your neighbor doesn’t exist. That’s a very good distance. I believe figure 7 clearly illustrates the progression, although you’ll have to enlarge it to see: 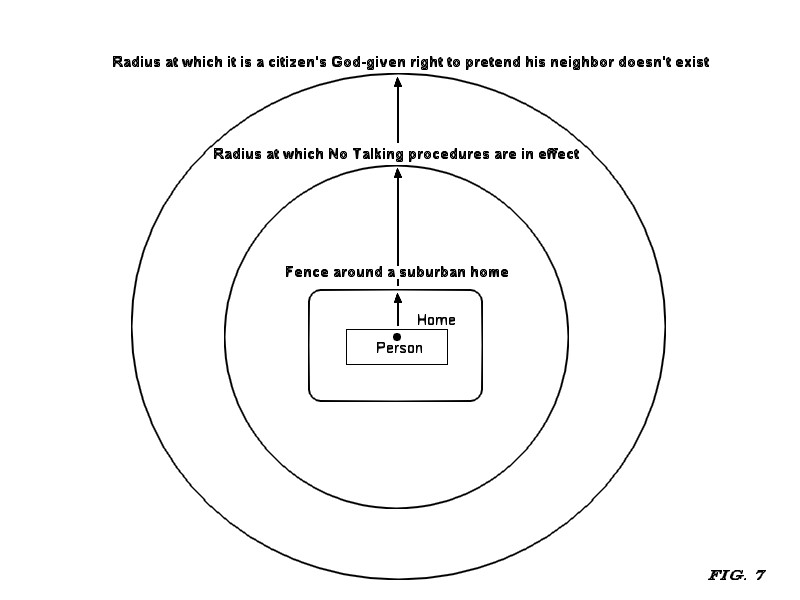 Of course, the best circle of all, the circle beyond which neighbors actually can’t be seen, was omitted for reasons of space.

It takes a lot of acreage, probably 3 or 4 acres, to really be confident that all the neighbors lie outside the pretend circle. It’s an actual distance, too, I think: the distance where one can pretend that the neighbor’s image on the retina is no longer an image of a person, but only a collection of unresolved neural firings. And obviously the “pretend radius” is smaller than the actual radius where people’s images can’t be resolved, but that’s okay.

This entry was posted in curmudgeonhood, humor, mach?, neighbors. Bookmark the permalink.