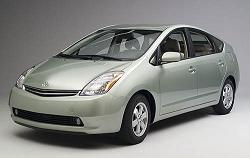 You know how it’s said that a hybrid gets better city mileage than highway mileage because 1) the gas engine shuts off when the car is stopped, and 2) because of regenerative braking? That’s gotta be bullshit, and here’s why:  an object in motion tends to stay in motion. Newton, law-giver.

For example: say you’ve got your Prius cruising along at 40 mph. You see the light up ahead turning yellow, so you slow to a stop. Yes, the regenerative braking is recovering some percentage of the energy the car put into accelerating to 40 mph, but it’s not recovering 100% of that energy. In fact, a website I went to today (since navigated away from and lost) rates regenerative braking as delivering between 5 and 10% of a hybrid’s fuel economy (which translates into some unknown but less than 100% efficient energy conservation). In other words, if the stoplight hadn’t been there, the Prius would’ve continued merrily along at 40 mph without losing any energy to braking.

Second, at the stoplight, the Prius’ engine shuts down for the wait. Yes, no fuel is being used at the stop, but on the other hand, no mileage is being run up either. It’s a wash. But, you say, when the light turns green and the Prius accelerates back up, most of that acceleration is accomplished by the electric motor before the engine kicks back on; there’s your savings!

Im gegenteil mein freund!  The electric motor is solely charged via the gasoline-powered engine. Yes, in the several seconds after the stoplight, the energy is taken from the electric motor, but at some point down the road, that energy has to be replaced by transferring it from the gasoline engine back to the electric motor’s battery, with some concomitant loss of energy during the transference. Newton.

So why are hybrids touted to be so much more efficient in the city than on the highway? It just don’t add up. It just don’t add up. My guess (and it’s just a guess, albeit an incredibly educated and insightful one) is that it has everything to do with average speed and wind resistance. My guess–educated, insightful, and of an overall incredible nature–is that if a Prius were tested on the highway (meaning no starting and stopping) at an identical average mph as that achieved in city driving, its mileage would be significantly better than what it could achieve in the city, owing to reduction in wind resistance (from that at normal highway cruising speed to that at 40mph) and Isaac Newton. Because speed increases linearly, while the amount of energy necessary to overcome wind resistance increases exponentially (several of my brain cells swear this is a true statement based on graphs they remember seeing long ago, and that’s good enough for me).

In sum: it’s obvious and goes without saying that a hybrid gets better gas mileage in city driving than a non-hybrid because of its ability to shut down its gas engine from time-to-time, as well as its being equipped with regenerative braking. But given the same average speeds (admittedly not going to happen) in highway vs city driving, a hybrid does not magically pull energy out of a hat to become somehow more efficient in the city than it is on the highway; the only reason that a hybrid achieves “better fuel economy” in the city is that, at average city-driving speeds, wind resistance is much less of a factor than at average real-world highway speeds. Therefore, the commonly-understood, commonly cited, but wrong, assumption that a hybrid’s better city mileage versus highway mileage arises from some laws-of-physics-defying aspect of stop-and-go driving is an often-parroted but chowder-headed massive misunderstanding of what is really going on.

This entry was posted in curmudgeonhood, humor, original research, science. Bookmark the permalink.