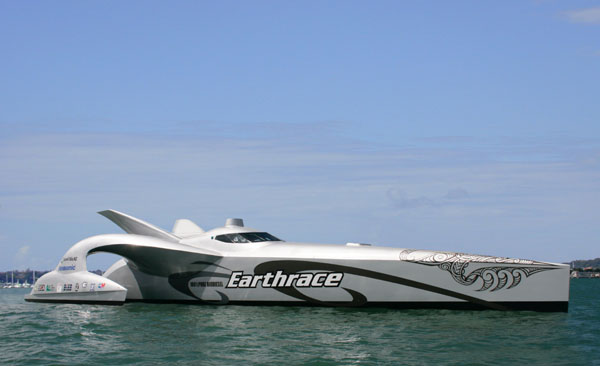 In March 2008, Earthrace will attempt to set a new speed record for a powerboat to circumnavigate the globe running 100% biodiesel, and with a net zero carbon-footprint, in order to increase awareness of the environment and the sustainable use of resources.

“Net zero carbon footprint.” While I don’t want to detract from something cool–I like it when cool things happen– this phrase is beginning to really grate. This boat has a 3,000 gallon fuel tank. A non-trivial amount of energy went in to making it in the first place. It’s only “net zero” because the company buys carbon offsets. I could make a Hummer or a Boeing 727 “net zero” doing that.

You know, if *everybody* bought carbon offsets to reduce their carbon footprint to “net zero,” we’d still have a problem. I don’t care how many trees you plant, a 727 still does what it does.

Before someone says that I don’t understand the concept behind carbon offsets, let me just say this: I understand it. It’s a wonderful way to roll around in your cake and then eat it. It’s a wonderful way to keep doing what you’re doing with a clean conscience. I *understand* that. You gave at the office. You adopted the skinny televised black kid in Ethiopia. What you didn’t do was leave your Hummer at home and walk to the grocery store.

“Net zero carbon footprint.” Jesus Christ. The phrase is about to become absolutely meaningless as every damn company piles on with its own product. It’ll be like what happened to the word ‘retarded’ when it leaked out into the mainstream; psychiatrists had to come up with some other word. A perfectly descriptive term, ruined by squatters.

When a can of coke is advertised as having a “net zero carbon footprint,” the retardeding of the phrase will be complete.

This entry was posted in curmudgeonhood, fear for humanity, Links, science. Bookmark the permalink.

2 Responses to The retardeding of “Net Zero Carbon Footprint”