Things I have seen 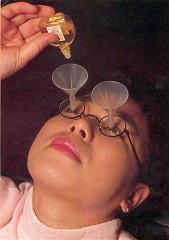 I’ve seen a lot of weird or wonderful things in my life. So have you. The difference is that I’m about to list some of the things I’ve seen:

1. A downpour that affected the street I lived on. The rain fell only in the street, and moved down the street before tapering off to nothing before it got to the end of the street.

2. A woman sitting in the bed of a pickup truck as it drove down the highway in Arlington on an early morning. Long, flowing hair; nude.

3. A satellite breaking up. I could see little pieces of fiery somethings slowly breaking off and fizzling as it yawed across the sky. It lasted long enough to say “Hey! Look at that!” to another guy, and he was able to look at it well before it disappeared.

4. A rainbow clear around the sun.

8. A fog so thick that I could hold my 4 year old hand at a 4 year old’s arm’s length in front of my face and couldn’t see it.

9. A train that I was waiting patiently to finish passing by stop so suddenly that I knew somebody at the next intersection had died.

I wonder what’s next?

This entry was posted in misc. Bookmark the permalink.

1 Response to Things I have seen

Bad Behavior has blocked 537 access attempts in the last 7 days.