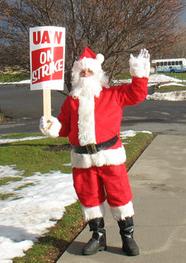 Imagine if your job were set up in such a way that your value within the company rose over time, yet that value could not be extracted and put to work at any other company. For example, you’ve been working for IBM for 15 years, but now IBM does something that really pisses you off. Yet you can’t pack up and leave for Google, because they will not recognize your 15 years at IBM. They will only recognize your several minutes (and counting) of time at Google, and pay you accordingly. Imagine that.

You could respond by saying “I’d never go into a field that was set up in such a way; I’d do something different.” But say you really liked doing what only IBM does. Or say your natural progression through life led you down this path, almost unbeknownst to you, until you finally had a chance to look back to see where you came from. In other words, your tenure at IBM is a kind of fait accompli. And if for whatever idle reason you ended up at General Motors or Best Buy or Barney, Barney, and Tate instead, other people, people you know, just like you, ended up working at IBM through the magic of statistical probability. It’s like this: some people are blue-eyed, some people have a recessive gene for dwarfism, some people work for IBM. There is a certain amount of choice involved in working for IBM, but some bodies, many bodies, work for it, and that is ineluctable. Try to remember how you fell into the job you have now, and remember how serendipitous that was. Remember?

Imagine that Unionism caused the devaluation of your work at comparable companies at the same time it caused your value to increase at IBM, but that this is not ipso facto a consequence of unionism itself. One can point to other industries where this did not happen, because a union was nascently and presciently fashioned to include all companies in the industry, not each company individually. But for IBM the time of nascence is long passed; the union is what it is, and too many people would be economically hurt to change its charter now. So from a worker’s standpoint, there are better and worse ways for a union to have come about. An industry-wide union will exist and bargain and allow its workers to prosper for as long as the industry exists; a company-specific union will exist and bargain and allow its workers to prosper for only as long as the company exists and prospers. Imagine there were political reasons that the latter was the only initial path to Unionism for IBM’s workers.

Imagine all that; now tell me how distaste for unions and Unionism can arise in workers without a concerted political effort to undermine unions and Unionism by powers that would rather hire workers for any amount of money, and fire workers for any reason. “But my distaste for Unionism comes from my personal, considered distaste for unions’ excesses and corruption;” but what unregulated or poorly regulated social or political agency ever maintained its original aims? And now that unions are better regulated, and have been better regulated for decades now–much the same way that some industries (oil, mortgage, health insurance) and the management of those industries have not– now that this is true, from where does the distaste arise? From considered thought? Or from politically-managed perception?

“I’m a manager at IBM. I can tell you that the unionized workers here are lazy, that they hide their laziness behind their contract, and that they feel entitled to that laziness.” With all due respect, Mr Manager, there are inefficiencies on both sides of the managerial divide. Inefficiencies are what make a job bearable. Inefficiencies are what keep one from being forced to work 24 hours a day, 7 days a week. The difference between managerial and worker inefficiencies is that the workers bargained for theirs, and you take yours when you think the Board isn’t looking or doesn’t care. That’s the difference. And if by some chance the Board does glance your way and sees you taking a little personal time in between moaning about the workers’ sense of entitlement, and fires your ass, you have the opportunity to pack up and start over at Google at a comparable salary, because that is the way your job was set up long before you took it.

I have no idea how I ended up working in a unionized industry. I look back, and all I can say is that it just sort of happened that way. But now that I’m here, now that my life is intertwined with the well-being of my union (and the well-being of my company, since that is how the Unionism ball bounced in my industry), now that all that is true, I find myself paying attention to how Unionism is portrayed in the media. It’s not a good portrayal; the public does not view Unionism in a good light. Perceptions have been managed.

Imagine that this kind of perception management happens all the time, in other ways, for other movements. Liberalism, for example. That’s not hard to imagine, is it? How else can we reconcile the way many citizens vote against the very people and things that would help them most? Or vote for the very people and things that help them the least; that, in fact, willfully cause great misery in their lives?

And how can we justify the actions of the worker who votes against fellow workers because raising their standards of living will be an inconvenience?

This entry was posted in corporate, fear for humanity, flying, hope, money. Bookmark the permalink.